Hiding numerous secrets and charms of former times, the island of Rab is created, an island of happiness and four bell towers, which will seduce you with the cricket songs. With each step, you will be increasingly convinced that you have arrived at a holiday oasis, be it for bathing and sunbathing, for a more active holiday, or for familiarising with the past.

A rugged bare island rock greets the coast of the Adriatic Sea, while plush forests of pine wood and fragrant shrubbery enrich the west coast of the island, spreading towards the horizon. Everyone can find a sandy beach of their own on this island. Create your own happy experience of the summer at Campsite San Marino! The island of Rab is rich in solitary bays, naturist beaches, beaches for families, but also for pets. They are all bathed in a crystal clear, warm and shallow sea.

If you get bored with lazing around on paradise beaches, go along cycling paths and you will have a possibility to get to know each tiniest part of this island. The island of Rab will take you back to the middle ages, thanks to the Rapska fjera festival, where, together with the locals, you can witness the revelation of past times. By being present at this unique event, you will return to the dark times of the middle ages, acquaint yourself with reputed professions, ways of entertainment, but also with folk customs.

Go further north and explore Goli otok (Barren Island), a small island not far from Rab, full of bare stone slopes, steep and high cliffs. Goli otok is not famous only for its rugged rocks, but also for the most well-known and the most infamous prison in Europe after the 2nd World War, which was situated on this island, from which escape was almost impossible.

Sail from the mainland and come to the island of Rab, find pleasure on numerous Rab beaches or sail into the middle ages and you will take to this island, its people and history.

The island of happiness

Due to its nature and the beauty of the sea, the Romans back then awarded it the title of the island of happiness - Felix Arba

Take a peek into the past

Return to the Middle Ages – visit the festival Rapska fjera

Beaches to wish for

Choose Island Rab as your destination and find your own campsite

Enjoy the advantages and the beauty of a campsite with comfort and the feel of your own home. 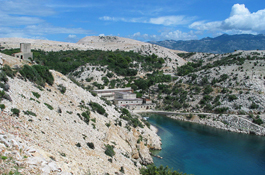 Small and uninhabited, Goli otok used to be ideal for sheep grazing, but the politics had another purpose in mind for it. Goli otok has remained remembered as an infamous political prison, which operated on the barren stone until 1989. Go on a day-long excursion and experience the first-hand story of Goli otok!

Rab is an island where everyone can find a beach for themselves – sandy or pebble, public or isolated – according to your wishes. By far the most famous is the Paradise beach, a long sandy beach, perfect for escape from everyday life.

A former grazing ground for town of Rab citizens' livestock has been converted into a landscaped park, which abounds in Mediterranean vegetation. European black pine, cypress, ash, holm oak, spruce, agave and the numerous bushes of this forest compete for which one of them will amaze the walkers the most. Enjoy your walk! 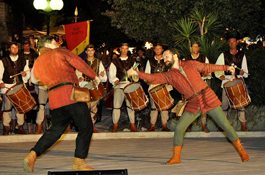 Meritable for nurturing the autochthonous and traditional values, Rapska fjera will take you back to medieval times. Learn the trades which were practiced by the local folk, taste the dishes prepared in medieval villages and dance away, accompanied by the music performed on authentic medieval instruments.

The beauty of the island of Rab’s sandy beaches is sufficient inspiration to artists to create sand sculptures and photographs on the theme of sand. During the month of June, Rab’s Paradise Beach turns into a museum of sculptures under the sun. You will find unseen creations of human imagination! 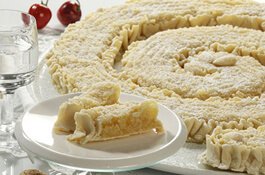 The proof that a single Mediterranean magic can be wrapped into a dessert is Rapska torta. Almonds, in combination with fragrant lemon and the taste of the maraschino liqueur, form the basis of this century-old dessert. Formerly served only during the holiday season, today it can also be found on your table!

END_OF_DOCUMENT_TOKEN_TO_BE_REPLACED

Make your search easier with a list of the top campsites in the Adriatic!
Seek inspiration among the most visited campsites on the AdriaCamps website!

Your request has been successfully received!

We will make sure that someone from our team takes over and responds to your request as quickly as possible (in the following 24 hours during the workdays).
If you do not receive our answer within 24 hours, please check your Spam folder just in case the email got delivered there instead of your inbox.

AdriaCamps.com uses cookies to give you a better user experience. By clicking the "OK" button you agree to use the cookie.Ok